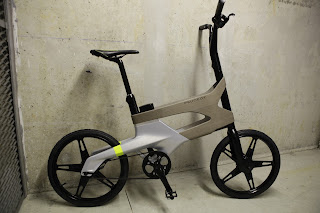 The DL122, first seen at the Geneva motor show.
I thought I'd start this first blog post with a few more images of this bike and some 'making of' photos.
The bike was created as a vision of a future Peugeot city bike and incorporates some ideas you'll see in upcoming bikes.
Since I've spent many years as a car designer I wanted to approach the design from an automotive perspective. Because bicycles are basically assemblies of parts there is often a lack of the coherence that is taken for granted in cars. Of course putting the laptop bag into the frame is the principle idea but there is also an integrated lock, hidden cables, a unique seat post clamp and belt drive.
The lock is just in front of the seat tube in a special holder. ABUS supplied one of there great Bordo locks which is as strong as a U lock but folds into a much smaller package. All the cables are fed into the combined handlebar / stem unit and are completely hidden in the frame until they reappear next the brakes and rear hub gear unit. 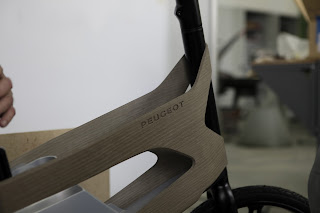 I think that the wood turned out really nicely. It's molded ply with the Peugeot name embossed into the sides.
Below are a few more images, including the bag in place, one of my sketches and some of the guys working on the bike. 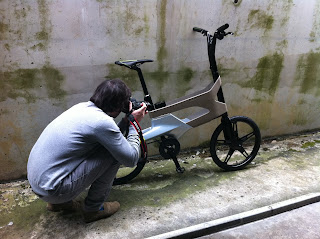 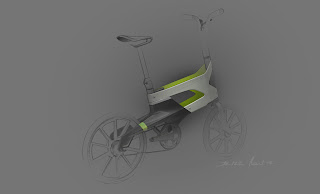 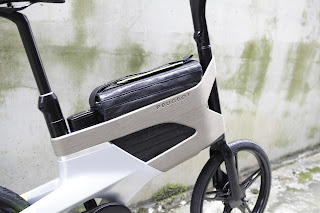 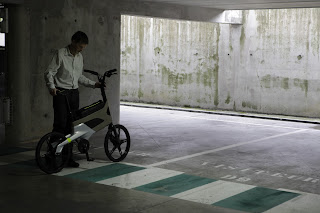 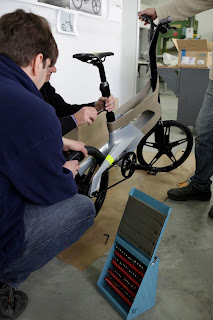