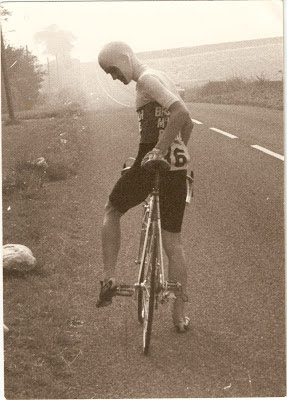 To be honest I can't remember where I bought this frame but I think I just got the stickers from Norris at Bespoke since I'd recently got the 753 built there. Anyway, it was a built from super light Japanese Ishiwata tubing and finished in all chrome with track ends (with a gear hanger, changing a wheel was interesting!). It was my time trial bike so, as was the fashion at the time, it was built be light, with a single 52 teeth chainwheel and a 13-17 5 speed block. I fitted it with a plastic headset, that, though weighing less than air it wore out when you looked at it. Gotta love the half taped bars.
Skin suits were just coming into fashion, though thankfully the balaclava never caught on. 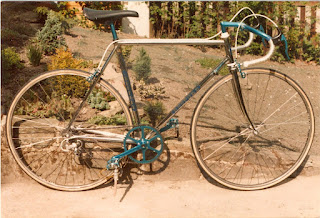 Norris also had the parts anodized for me which created quite a unique look. Later I had some very light 28 spoke radial sprint wheels built for it that needed regular trueing but looked lovely at speed. What you couldn't see is that I ran them with one ball bearing removed, no dust caps and just light machine oil! Things we thought made you fast in 1980! First bike I did under the hour for a 25 on.