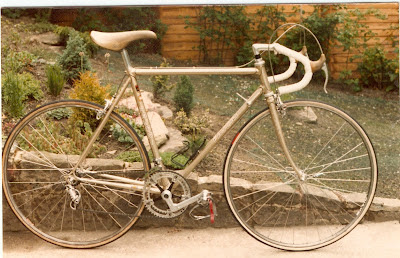 This was the first bike that I had made to measure. It's built from 531SL by Ellis Briggs of Shipley in West Yorkshire. I spent many an evening with my nose pressed against their shop window or pouring over the frames catalog before I finally plumped for this spec.

Ellis Briggs are a good Yorkshire make, but they created the Favori name for their race bikes, presumably to add a bit of Italian flare.
At the time (around 1980) 531SL was 'the' tubing and Briggs's built it up into a lovely frame. I've always been a bit of a bike tart so I opted for lugs with the Clubs, Hearts, diamonds and spades cut out. 'Shot in' rear stays and brazed on cable guides and lever bosses. It's painted what was called Champagne, with black lining and the Favori name plastered everywhere.
The bike was built up with a Campagnolo Record groupset that I took from my Falcon team bike (more of later, if i can find any decent photos)  and later I added the bizarre PMP 'L' shaped cranks. Totally useless (they broke) but cool looking (bike tart!). Topped off with super cool Concor cream saddle (soon went brown) and Cinelli stem and '66' bars. Sprints and tubs of course. Breaks my heart that I haven't still got it, but I think the same about lots of my bikes........
Posted by neil at 12:30 PM