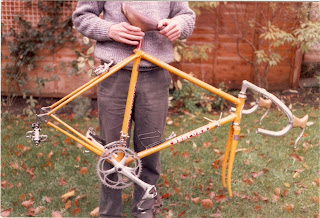 My second made to measure bike, this one by Bespoke of Settle in North Yorkshire. Norris Lockley owned the shop and built, or at least worked on, all the frames.
Club runs with the Bronte wheelers often involved a cafe stop in Settle and I guess we'd pop into Norris's tiny, under the arches, establishment. Though cramped there were always a few gems in there and I suppose I just fell for one of his creations, especially as he was building in the still rare Reynolds 753. 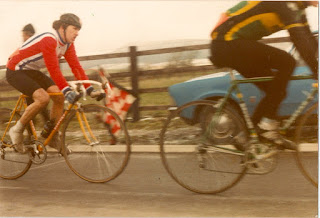 Its a bit less flash than the Favori, despite the colour, with plain lugs, though I did ask for a Columbus fork crown just because I loved the press in plastic Columbus bird logo in red. It was an odd choice considering it was built in Reynolds tubing but then I did say I was a bike tart. 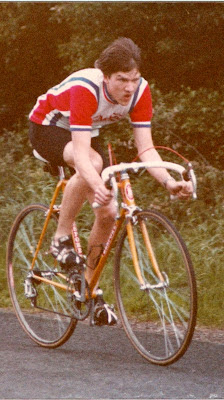 At that time (1981) chrome was a bit passé so I had it painted in flat yellow with just the dropouts chromed. It was a nice frame and the brazed on front mech was still a bit of a novelty at that time so it looked pretty modern but in retrospect the stickers were a bit naff. I guess it's for that reason I had the frame repainted twice in the next few years.

This is me riding the Bespoke in the early season Whitehills road race near Skipton. I remember it well, not due to my performance but due to the fact that Malcolm Elliot was riding. This was about 1982 when Elliot was already a big noise (Junior world champs rider and national hill climb champion) but he went on to much greater things and is still rising today. Legend.

Here, I'm riding a time trial at the Harrogate Festival. In the days before aerobars, or helmets!
Posted by neil at 1:41 PM