1903 La Française ridden by Maurice-Francois Garin FRA
For roughly the cost of entering this years Etape du Tour you could have ridden the first ever Tour de France. At 2428 kilometers it may have been the second shortest Tour, but it was covered in just 6 stages, and of course the roads were virtually cart tracks. Nevertheless 79 riders paid their 10 francs entry fee, though 19 of those thought better of it before even turning up, and despite the fact that they were allowed to continue in the race even if they had failed to finish the previous stage, only 21 reached the finish at the Parc des Princes in Paris.

The first stage, won by Garin, was a 467k haul from the Au Reveil Matin café in Montgeron, south of Paris through the heart of the country to Lyon. The final stage from Nantes to Paris, also won by Garin, was longer still at 471k.
At the end of the race Garin was 2hours 49 minutes ahead of the second place rider while the last placed man was 64h47m down.

Garin received 3000 francs for winning the race which he used to invest in a garage where he was to work for the rest of his career following his retirement after the 1904 Tour.

Although insanely arduous, even by todays standards, the riders would have tackled a five-week race if l'Auto editor Henri Desgrange had had his way. With only 15 entries he was forced into a last minute rethink. Not only did Desgrange cut the length of the race but he also offered a 5 francs daily allowance.

Winner Garin was already a prolific winner having won his first race 10 years earlier when he took the honours in the Namur-Dinant-Giet in Belgium. He used his 850 francs winnings from that event to purchase a lighter bike, though at 16 kg it was still a hefty machine, despite costing well over €3000 in todays money. At least the pneumatic tyres softened the ride.

For anyone who still has doubts about the exploits of the riders at the turn of the century compared to today, it should be noted the Garin rode a paced 24 hour race and covered over 700k and completed the Paris Brest Paris in 52 hours.

All the 21 sponsored riders in the race were supported by bicycle manufacturers. The first 5 overall rode for La Française, while the other marques represented were Brennabor, Gladiator, Champeyrache, JC cycles and Diamant.

Société La Française,manufactures of bicycles and spare parts was created by Pierre-Victor Besse and François Trepier in 1891 and was based at 27, rue Saint-Ferdinand à Paris.
In 1894 Mr Trepier sold his shares to John Varmm Hammond to create the brand Besse & Hammond while transferring the head office to 11, rue Brunel, also in Paris. The company had a worth of 500,000 F
In 1899, in search of capital, Alfred Edwards was brought on board, and his stake raised the companies value to 1.6 million francs. Company became La Française-Diamant, manufacturer de Vélocipèdes and Motocycles.

The companies store was run by former world champion track cyclist Edmond Jacquelin from 29, avenue de la Grande Armée (virtually next door to Peugeot) and later opened a branch for export at 34, rue d'Hauteville, again in Paris. The factory was in the suburb of Pantin, at 47 rue Cartier Bresson, a commune in the north eastern of Paris

At the end of WW1, the company joined a consortium of bicycle manufacturers called La Sportive, which included Peugeot, Hurtu, Alcyon, Automoto, Grioffon, Liberator, Laboir, Gladiator, Clement, Armor and Thomann. By 1923, Gentil Alcyon had become the dominant company, and took over La Francaise Diamant, though the marque continued the name would be seen seen in races up until 1955 and was present at the Brussels exhibition of 1956.

Garin first piloted a La Française in 1901 when he won the marathon Paris-Brest-Paris, on board a 18 kg fixed gear machine with a single bowden cable operated brake. The following year he won the Bordeaux-Paris before heading their 8 man Tour de France team.

The bike was typical of that era and although I've read that it was black with a tricolour headtube I've never seen a picture of that colour scheme. The wheelbase was around 1.2m as apposed to the 1m of today, which, as well as the very slack fork rake helped to take some of the sting out of the terrible road surfaces.

It was, of course fixed gear and I believe that it had a single rear brake, which interestingly seemed to be operated by the right hand lever, British style, on all bikes at the time. The only rider who used a free wheel, despite them being available since 1989, was Arsène Millocheau, who finished last.
The fixed gear helped to slow the bikes down, which was quite a useful feature given the primitive nature of the brakes. I noted that Garin had brakes operated by a Bowden because many still had rod brakes, with pads that rubbed on top of the tyre. 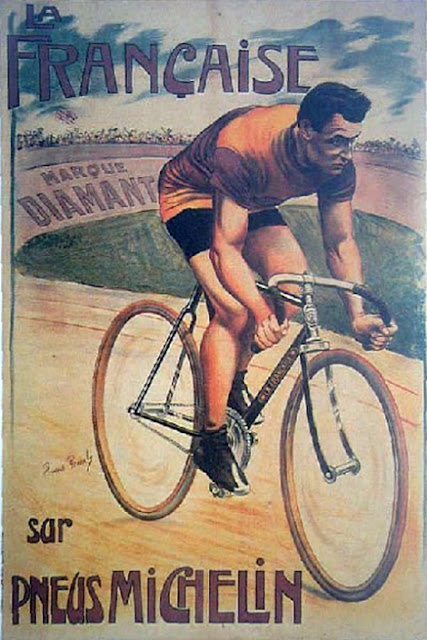