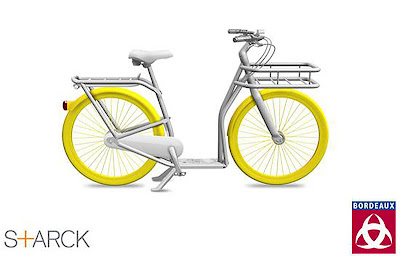 The Pibal was launched to much excitement today in Bordeaux. The involvement of the legendary Philippe Starck has given a huge boast to the project as can been seen by the press coverage.  Peugeot are happy to be involved and my colleague explains why;

Sandrine Bouvier of Peugeot says "We are delighted to be associated with the project initiated by the city of Bordeaux to multiply modes of urban transport. Continuous innovation in mobility is a major challenge for the brand since the launch of Mu by Peugeot in September 2009. Successfully mass produce the vision of Starck Bordeaux is the criteria for us exciting."

I think bikeradars piece on the bike sums it up nicely;

Bordeaux’s answer to London’s Boris Bike and Paris’ Vélib has been unveiled – the ever-so-striking Pibal, designed by Philippe Starck. The pre-prototype shown off to the city mayor yesterday morning is constructed of aluminium and weighs 16kg, 7kg less than its UK cousin.
The bike’s most notable feature is a scooter-inspired platform, for trips where it’s easier to push off and coast. The Pibal features internal hub gearing and dynamo-driven lights. It will be manufactured by Peugeot.
The first 300 bikes will hit Bordeaux’s boulevards in September 2013 and phase out the city’s current fleet of 3,500 communal bikes, regional paper Sud Ouest reported.
Starck, who is most famous for interior decorating and his cult product and watch designs, worked on the project for free. “I wasn’t interested in the aesthetic at all,” he said. “It's a workhorse; this is a rustic bike.”

It's an intelligent solution to s specific question. Bordeaux is quite a flat city with lots of pedestrianised areas, so  it's logical to create a bike with which you can switch easily between riding, coasting and walking. A pibal is a type of eel and I guess the bike can weave its way through obstacles as easily as an eel. 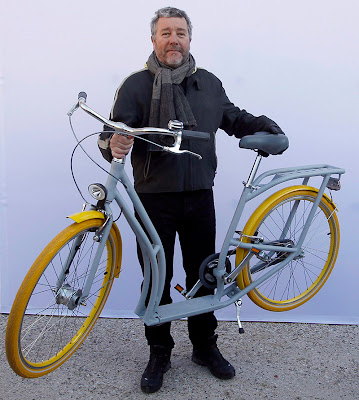