1904 Cycles J.C. ridden by Henri Cornet FRA
Maurice Garin defended his title in 1904 only to be later disqualified and, cynics might say, starts a trend of cheating that lasts to this day. When Garin was handed a  two year ban he decided to call it quits and retired from the sport.

Garin was far from alone in committing misdemeanors since there was general mayhem in the 1904 race. Stories of cheating were rife, from taking tows from cars and motorcycles to attempted poisoning. The fans were worse, felling trees to block the roads, spreading tacks and beating riders to a pulp at the roadside. An arguement by rival betting cartels ended in a mass brawl that was only ended by pistol shots being fired by Lefèvre, creator of the Tour.

The format of the race was the same as the previous years, 6 stages, averaging over 400k each, with night time starts to ensure afternoon finishes. It was impossible to police the 88 riders over such distances, but rumours started to circulate that Lefèvre had illegally fed Garin from the official car, worried about the Tour's big star dropping out with hunger knock.

The news lead to other riders taking matters into the own hands, by taking pace from cars and motorcycles, while mobs at the side of the road tried to obstruct or even beat up riders in order to help the local stars. There was a plan to attack and even knife Garin and in fact Giovanni Gerbi who was riding with Garin retired suffering broken fingers following an attack on the pair as they traversed the col de la Républic.

Eventually the first four riders were disqualified leading to the crowning of Henri Cornet, who at 19 is to this day the youngest ever winner.

Garin's bike, from Cycles JC was created by J.Conte who was another manufacturer that started in the late 1890s. Like Peugeot they were based on the avenue de la Grande Armée in Paris. I believed that they were later swallowed by their mighty neighbors. 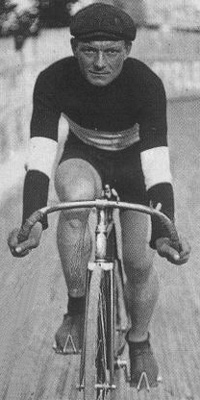