1905 Peugeot ridden by Louis Trousselier FRA
After the antics of 1904, the 1905 race was different in many ways, though there are still stories of tacks being thrown on the road, with less blatant cheating.
Firstly there were more stages, 11 in all, and they were shorter so that riding through the night was minimised. The winner was decided by a simple points system so that distancing a rival by hours had less effect on the final standings.
The riders didn't have it all there own way. To make up for the 'easier' stages the Tour was much longer than the two previous additions, at around 3000k and there were real mountains for the first time, including the Ballon d'Alsace (1,178m), a favourite of todays sportive riders. Non of these seem to deter the riders, who sped round the route nearly 2kph faster than in 1905, at over 27kph. With their fixed gears bikes and typical 22x11 gearing, 27.2kph equates to an average cadence of 105 rpm. That's average!

Although still riding single fixed gear bikes, the organisers generously allowed bike changes to machines with higher or lower gears depending on the terrain. In fact there were two categories of riders, the coureurs de vitesse and the coureurs sur machines poinçonnées.The riders in the first category were allowed to change bicycles, while the riders in the machines poinçonnées category had to use the same bicycle for the entire race,


Pautrat who finished 8th overall was the winner of the coureurs sur machines poinçonnées category.


Amazingly Trousselier won 6950 francs as victor, which was a huge sum even in todays money, yet blew the lot of it after a night of drinking and gambling with friends the night the race finished. I've heard that Lance had some good bashes but Trousselier clearly knew how to party. Luckily he came from a wealthy family that had a flower business in the centre of Paris, which he took over after WW1. In fact race organiser, Henri Desgrange, always seeking to give his riders more colourful personalities with descriptive nicknames referred to Trousselier as "the florist". Well, it's better than Trou-Trou, his other name given by the fans that fellows the normal, rather uninspired, French way of creating these nick names.

Trousselier was obviously a bit of a lad and actually rode the Tour while on a few days leave from the army. Apparently only the fact that he won saved him from possible punishment for desertion. 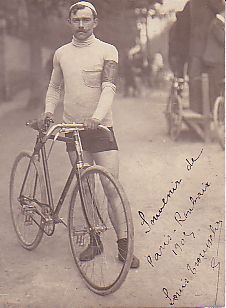