Moser was at the heights of powers when I was getting into cycling, so along with Saronni, became a teenage hero of mine. I had posters of them both in the cellar of our house, where I used to tinker with my bikes.

So I was more than happy to share a glass or two of Moser wine with our suppliers on a recent trip to Taiwan. Can't remember if it was good stuff since quite a bit of grape and grain flowed that evening. The Taiwan beer was as good as ever, I know that.

Moser was a great rider and ranks third in the all time list of winners (thanks Wiki), behind you know who and Rik van Looy as well as winning three monuments including Paris-Roubaix three times consecutively. He was also world champion and Giro winner though it was his 1984 hour record that sticks in my mind. He was the first rider to crack 50k with the aid of a rear disc wheel, the thin air of the Mexico city track and, as we were to find out later, a big dose of EPO.

When his racing career was over in 1988 he set up his vineyard, Moser Azienda Agricola, on the outskirts of Trento where he works to this day producing his wine, all of which celebrate some aspect of his racing career. 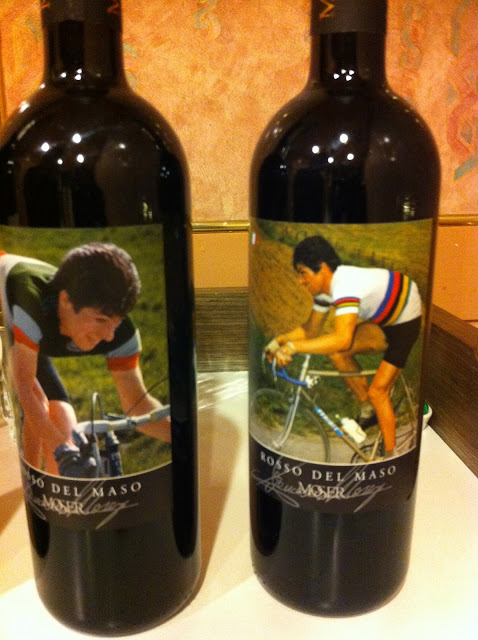 Finding the picture of the Moser wine got me thinking about Mosers hour record bikes. In taking the hour record he was responsible for much of the move towards aero bikes but it was his unsuccessful attempt to retake the record in 1985 that saw one of the most startling bikes ever to roll round a velodrome. You can keep your 29ers, this beauty was a whole meter across! You really have to see it in action to appreciate its magnificence and see what the UCI put an end to. We may never see its likes again! Look here for the full glory
http://www.youtube.com/watch?v=2xFUMGCHI94