1911 Alcyon ridden by Gustave Garrigou FRA
1911 was the year the Tour hit the Alps, and the organisers didn't mess about, creating a course that took in the Galibier and Télégraphe. It might make us modern day mortals feel better knowing that there was only one rider who managed to ride the whole of the Galibier, but of course he only had the one gear.

Two teams dominated the race with Alcyon and La Français both fielding 2 previous Tour winners.
But there was to be drama before the victor was crowned. Firstly, a challenger to Garrigou, Paul Duboc was heading the race on the queen stage from Luchon to Bayonne, a 326k haul over the Peyresourde, the Aspin, the Tourmalet and finally the Aubisque when he fell ill after taking a drink at the feed station.

It was assumed that Duboc had been poisoned. At first the suspicions fell on Garrigou because he had the most to lose from a Duboc victory. It is now thought that perhaps the bottle given to Duboc at the sign in contained the poison and that François Lafourcade, who had ridden so well in the mountains of the previous years Tour, may have concocted it. It is now universally accepted that Garrigou was innocent, but at the time the partisan crowds were out fro blood. In the later stages, as the Tour entered Duboc's region around Rouen someone put up signs along the road;

"Citizens of Rouen! If I had not been poisoned, I would be leading the Tour today. You know what to do when the Tour passes through Rouen tomorrow."

Legend has it that Garrigou was given a bodyguard and even wore a false mustache (which seems unlikely since he is sporting a splendid mustache of his own in every photo that I've seen).

despite these difficulties and a strong La Française team, who placed riders in 2nd, 3rd and 4th overall, Garrigou went on to win the Tour with a good points advantage. 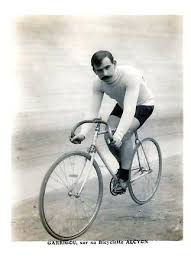